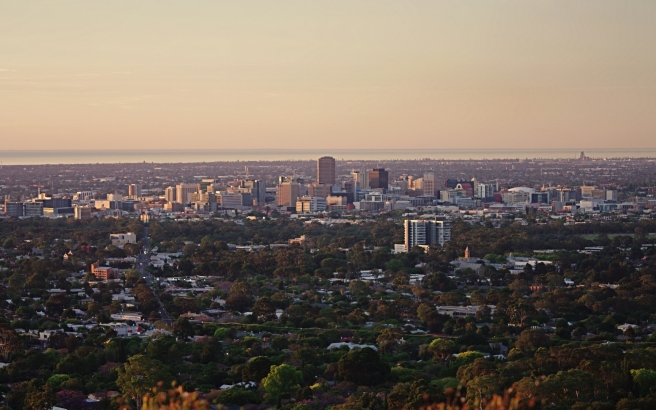 Adelaide, like some of the world’s most romanticised cities, has a Mediterranean climate with dry summers and mild winters: think Algiers, Athens, Barcelona, Casablanca, Istanbul, Jerusalem, Madrid, Marseille, Seville, and Rome, and – away from the Mediterranean – Perth, Cape Town, Los Angeles, and San Francisco. It’s a climate that’s well adapted to human flourishing, associated with the ‘Mediterranean trinity’ of wheat, vines and olives. Here, in South Australia, the local wine and tourism industries enthusiastically remind us there are over 200 cellar-doors within an hour or so’s drive of the CBD – some in Thiele-country, others in Heysen-country, others to the south of the city. Even when the spring and summer days are harsh to us with their heat and dryness, they pay a dividend of long, warm evenings. (It was Camus who wrote in his essay ‘Summer in Algiers’: ‘The loves we share with a city are often secret loves.’) It’s a climate that’s favourable to Adelaide at its cosmopolitan – and romanticised – best: the vision of a hospitable and orderly city, of long summer evenings, alfresco dining, local wines and produce, and sunsets over the gulf. And the arts, and poetry, are an essential part of it, too. Fittingly, then, Little Windows Press – the enterprise of publishers Jill Jones and Alison Flett – launched its second annual series of chapbooks on a warm Adelaide evening at The Howling Owl, in a lively corner of Adelaide’s East End – between the fashionably unfashionable crowd at The Exeter Hotel, and the unfashionably unfashionable mock-Tudor of The Elephant British Pub. The 2017 series features Adam Aitken’s Notes on the River, Ali Cobby Eckermann’s The Aura of Loss, Jen Hadfield’s Mortis and Tenon and Kathryn Hummel’s The Body That Holds. It was a great launch. For notes on the event and each of the chapbooks, I recommend this blogpost by Adelaide poet JV Birch. The chapbooks are available from the Little Windows website. 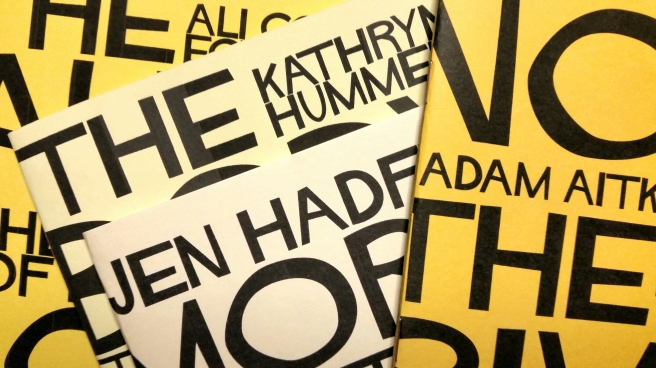 More recently, Café Latino at Woodville hosted an excellent and enlivening evening of food, poetry and music on Sunday, 26 November. The event neatly foregrounded the poetry, and offered a selection of favourites – courtesy Shakespeare, Hopkins, Shelley, and the like – along with lesser known poems, poems by local poets, and popular song lyrics read as poetry. This month, old news was good news: I enjoyed posting a few words on Facebook, reflecting on the ‘Light & Glorie’ project Aidan Coleman and I ran in November 2012. Meanwhile, the new news was more complicated. It was sad to read that Tincture Journal will be publishing its final edition on 1 December 2017, having achieved a great deal since it began in 2013. A big congratulations and best wishes to editor Daniel Young, and the editorial team, including poetry editor Stuart Barnes. It was disappointing to read that Laura Kroetsch, Director of Adelaide Writers’ Week since 2012, will direct her final Writers’ Week in March 2018. One distinctive and welcome hallmark of Laura’s directorship has been her efforts to introduce many of New Zealand’s most celebrated poets to Adelaide audiences. It was disappointing, too, to read that the Adelaide Festival Board is reconsidering Writers’ Week’s status as the country’s only free writers’ festival – an essential characteristic since it began in 1960. Being free to the public is a concession that gives all South Australians access to great writers, writing and ideas – particularly those people whom ticketed events would most readily exclude. I think back to my own tentative introduction to Writers’ Week, which was an initiation into a culture of ideas and writing, beyond the hallways and bookstacks of the university. 2006, my first serious Writers’ Week, acquainted me with the work of Nick Jose, Gail Jones, Simon Armitage, Judith Beveridge, Peter Skrzynecki, Vincent O’Sullivan, and others I don’t recall. And early March days at Writers’ Week are a paradigm of Adelaide at its cosmopolitan (and ‘Dunstanian’) best. It’s a vision of the city (indeed, the Province) that is (or should be) in keeping with the idealistic and dissenting ambitions of its founders, including those honoured by the Pioneer Women’s Memorial Garden in which Writers’ Week is set. Of course, the city’s singular idealism is haunted by its notorious vulnerability to the sinister. It was Salman Rushdie who said at Writers’ Week in 1984 that ‘Adelaide is an ideal setting for a Stephen King novel or horror film … sleepy, conservative towns are where those things happen. Exorcisms, omens, shinings, poltergeists. Adelaide is Amityville, or Salem, and things here go bump in the night.’ Kerryn Goldsworthy quotes Rushdie more fully in her book Adelaide (NewSouth Publishing, 2011), and reminds us that his reckoning predates the events associated with Snowtown by two decades. She goes on, though, to counterbalance this view with that of Adelaide novelist Barbara Hanrahan (1939-1991): ‘[she] sees the strangeness of Adelaide crime as not unique to the city but rather as highlighted and thrown into stark relief by the contrast with its carefully maintained outer image, which is both of beauty and of virtue’ (p. 169). In any case, it’s a rumination that places Writers’ Week at the centre of Adelaide’s identity and cultural life. There’re plenty of reasons to be careful and protective of its legacy, and its accessibility to all quarters of the South Australian community. To return to the good news, it was great to read poems by South Australian poets Ken Bolton, Ali Cobby Eckermann, Natalie Harkin, Jill Jones, Mike Ladd, and Heather Taylor Johnson among Sarah Holland-Batt’s selections for The Best Australian Poems 2017 (Black Inc, 2017). Sarah will be a featured writer at Writers’ Week 2018, along with New Zealand poet Ashleigh Young and US poet Patricia Lockwood. However, there’s plenty of summer to enjoy or endure before then. In the immediate short-term, the Mediterranean climate is offering a humid 34 degrees, partly cloudy, with the chance of thunderstorms.

View all posts by Thom Sullivan